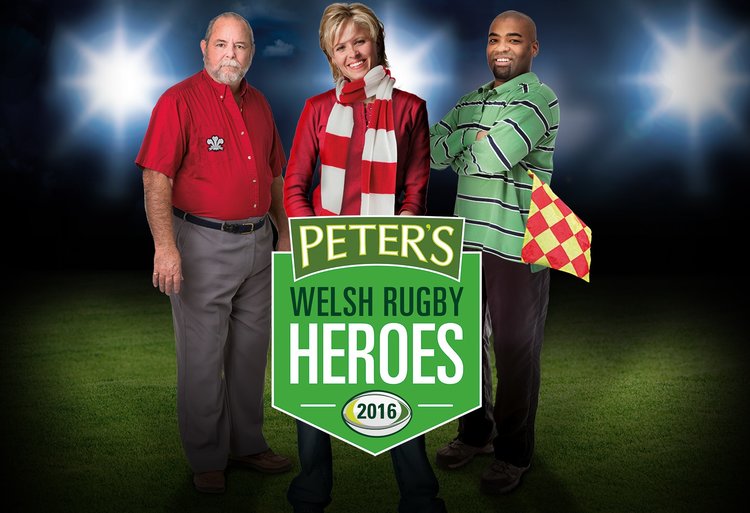 Peter’s Food Service’s successful Welsh Rugby Heroes campaign has been recognised at this year’s CIM Marketing Excellence Awards, beating off competition from the likes of ITV, EDF Energy and the NHS Professionals.

The CIM Marketing Excellence Awards distinguishes outstanding marketing by organisations, individuals and teams and rewards the innovation delivered by marketers who are at the cutting edge of their profession.

The nation’s favourite baker, Peter’s, launched the Welsh Rugby Heroes competition last year asking for clubs and individuals to nominate their local heroes who go the extra mile to support Wales’ best loved game at a grassroots level. 15 finalists were selected by a panel of judges from more than 100 entries from 85 rugby clubs across the country, who were then put to a public vote.

Peter’s carried out a series of highly targeted integrated activities to promote the campaign including linking with media partner, Media Wales, instore sampling events, changing vehicle livery, on pack stickers, point of sale material and targeted outdoor activity. All activity was run alongside a dedicated social media campaign, creating over 2.7m opportunities for consumers to see the campaign. “This award is for all the unsung heroes who help keep Wales’ passion for rugby alive and is also testament to the work of our team, our agencies and our 850+ workforce.”

Commercial Director for Peter’s, James Osgood, said: “The whole process of the Welsh Rugby Heroes campaign was so rewarding and far surpassed our expectations. The response from clubs, players and fans from across Wales was incredible with almost a third of WRU affiliated clubs entering. The calibre of entries was extremely high and we were delighted with the outcome – modern day marketing is all about your target audience and creating campaign content around a great idea such as Peter’s Welsh Rugby Heroes – our campaign certainly delivered that opportunity.

“To win the CIM Marketing Campaign of the Year Award reaffirms how successful the campaign was. We couldn’t have done it without everyone’s support; from those that nominated people, the rugby clubs, our finalists and our overall winners. This award is for all the unsung heroes who help keep Wales’ passion for rugby alive and is also testament to the work of our team, our agencies and our 850+ workforce.”