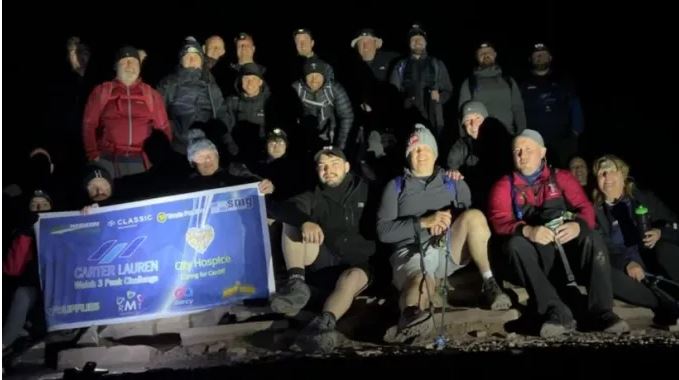 The staff of Carter Lauren Construction have climbed the three Welsh peaks within 24 hours, raising over £17,000 in aid of City Hospice.

The team of 29, including City Hospice’s Corporate Fundraising Manager Nicky Piper, started climbing Snowdon at two in the morning, reaching the summit and returning by 8am to be greeted with refreshments organised by Carter Lauren Construction.

The team then went on to conquer Cadair Idris and travelled down to Pen Y Fan, finally reaching the peak and returning to the bottom 15 minutes before midnight.

The Carter Lauren Construction team are long term supporters of City Hospice, having completed the North to South bike ride last year, cycling over 225 miles and raising over £25,000.

The only provider of home-based specialist palliative care in Cardiff, City Hospice provides care to people with terminal or life limiting illnesses such as cancer, dementia, chronic obstructive pulmonary disease (COPD) and motor neurone disease (MND), in addition to bereavement support for families.

Organiser of the event, Jon Folkes, Senior Contracts Manager of Carter Lauren Construction, said: “Climbing the three Welsh peaks in 24 hours was extremely hard and there were lots of tears, but it is a memory that will stay with us for life and it was well worth it for the money we raised for the worthy City Hospice.”

“I personally would like to thank the team for allowing me to join them on challenge; I had an amazing time and made many new friends, even if it was one of the hardest things I’ve done!”

You can still sponsor the team and donate to City Hospice here: https://www.justgiving.com/team/CLCWelsh3Peaks