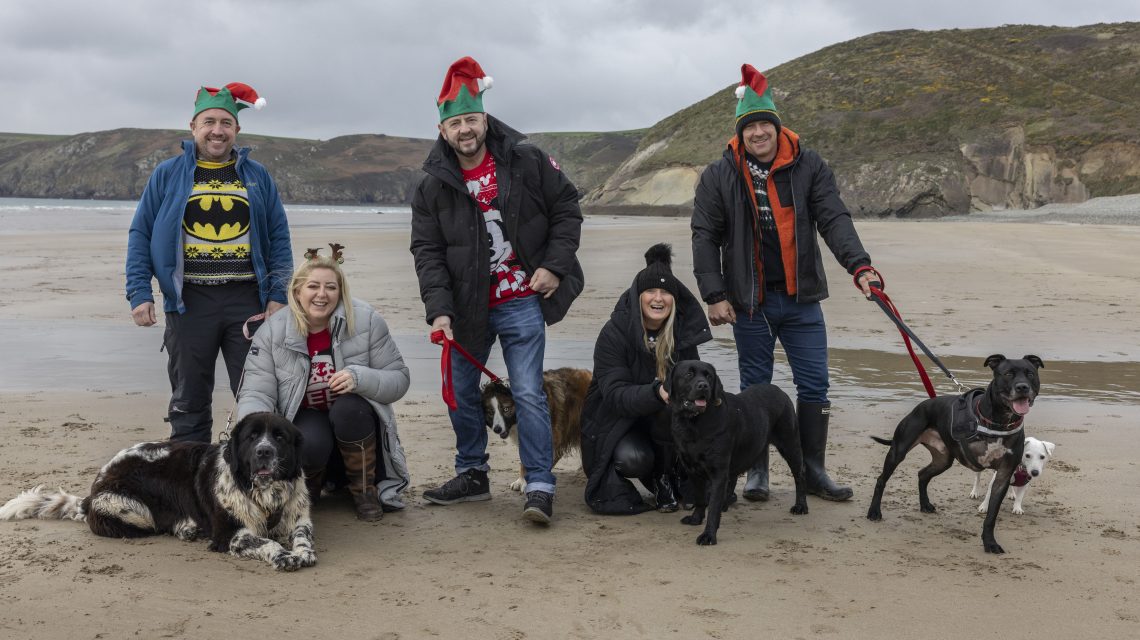 Santa Paws is Coming to Town

This December, a group of Welsh National Lottery winners have joined forces to support Welsh pet food bank, Cariad Pet Therapy, and donated lots of pet supplies and seen for themselves how the organisation operates and learnt more about their beneficiaries.

This December, a group of National Lottery winners have joined forces to support a Welsh pet food bank as they gear up for a busy festive season.

The millionaire team, made up of dog-loving winners from across Wales, jumped at the chance to spend the day with National Lottery funded community interest company Cariad Pet Therapy, and meet some of the doggy volunteers.

Volunteers for the day, the National Lottery winners donated lots of pet supplies to the pet food bank and were able to see for themselves how the organisation operates and learn more about their beneficiaries.

The National Lottery winners included Chris and Geraldine Bradley from Carmarthen whose Grandfather Bob won £3.6M in 2006, Nigel Willetts from Caerphilly who won £1M in 2014 and Richard and Faye Davies from Brecon who won £1M in 2018.

The winner volunteers arrived at Cariad Pet Therapy, ready to get stuck in. They parcelled up the donated pet food, restocked shelves and met some of the people who have benefitted from the service. 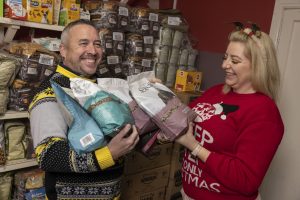 Brecon winner Faye Davies said: “As a mental health nurse, I have seen first-hand the impact pets can have on people’s mental well-being so organisations like Cariad are vital in ensuring people stay well, especially when times are tough.

“It was also great to meet with other winners and have a proper catch up, while doing our bit for this lovely charity. We’ve got two dogs and I know that we’d be lost without them so I think what Cariad does is really important.”

Nigel Willetts said: “Getting out and about, seeing the good causes that players of The National Lottery help to fund is one of the highlights of being a National Lottery winner so it felt really good to be back in the community again.”

Cariad Pet Therapy was founded by volunteers Rob Thomas and his wife Chrissie, as they believe that regular contact with animals has a positive impact on people’s mental well-being. They therefore work with fifty volunteers to take dogs to visit residential care homes, schools, hospital wards, isolated and elderly people, as well as workplaces across west and south Wales.

Cariad has twice benefitted from National Lottery funding, in January 2020 they received £9,480 for their Dogs on Your Doorstep project and in September 2020 they had £6,600 towards a scheme to donate 35 robot pets to people with dementia in care homes.

In January 2021, they launched the Cariad Pet Food Bank when they realised that people were struggling financially in the wake of Covid and there was a very real possibility that people already under incredible stress, might be forced to give up their pets if they couldn’t afford to feed them.

They found that many of those struggling were feeding their beloved pets before themselves during the pandemic. So far Cariad has donated just under 70,000 meals for animals in need. 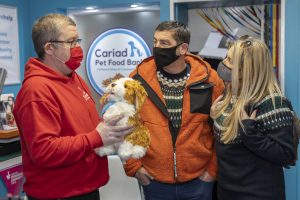 Rob, Director of Cariad Pet Therapy, said, “We are so grateful to the National Lottery winners for their generous pet food donation which means that we are well stocked for the festive season and hopefully well into the New Year. It was great that they were able to come along to the pet food bank and see for themselves where the donations will go and how it all works.

“When we first set up the pet food bank, we didn’t expect to be as busy as we have been but it’s been such a tough time for so many people that we have found our services in constant demand.”

By playing any National Lottery game, players generate more than £30M each
week for National Lottery-funded projects. This money helps support
everything from the local charity making a difference where you live through to
helping our nation’s athletes win Olympic and Paralympic gold medals. To
date, over £45BN has been raised and distributed to National Lottery Good
Causes through more than 660,000 individual grants.